Some clients are already asking what to expect when the next version of the Payment Card Industry Data Security Standards is released next year. That’s no surprise since decisions that are being made now about IT infrastructure and policy could be affected by any changes. As such, having a knowledgeable PCI compliance company to rely on is paramount.

It’s too early to know definitively what will change when Version 4.0 of the PCI DSS is released, but there are evident trends to share. While not cast in concrete, these trends are foreshadowed in the PCI Council’s blogs and feedback reports from industry sources who have reviewed early drafts.

Bottom line: The 12 core PCI DSS requirements are not expected to fundamentally change with PCI DSS v4.0, as these are still critical components of securing credit card data, according to a recent PCI blog.

But changes are afoot that would account for advancements in security technology, risk mitigation techniques, and evolving threats. The changes would also strengthen security control requirements while at the same time adding flexibility to achieve compliance.

Based on the current timetable, v.4.0 won’t be released until mid- to late 2021.  A lot could happen between then and now, but based on early drafts, the following areas may be subject to change:

According to the PCI council, version 4.0 of the PCI DSS is expected to be released in mid-2021. Once the standard, supporting documents (including SAQs, ROCs, and AOCs), training, and program updates are released, organizations will have an extended transition period of 18 months to update from PCI DSS v3.2.1 to PCI DSS v4.0. This extended period will allow organizations time to become familiar with the changes in v4.0, update their reporting templates and forms, and plan for and implement changes to meet updated requirements.

Below is an overview of the planned transition timeline and potential timing for future-dated requirements. 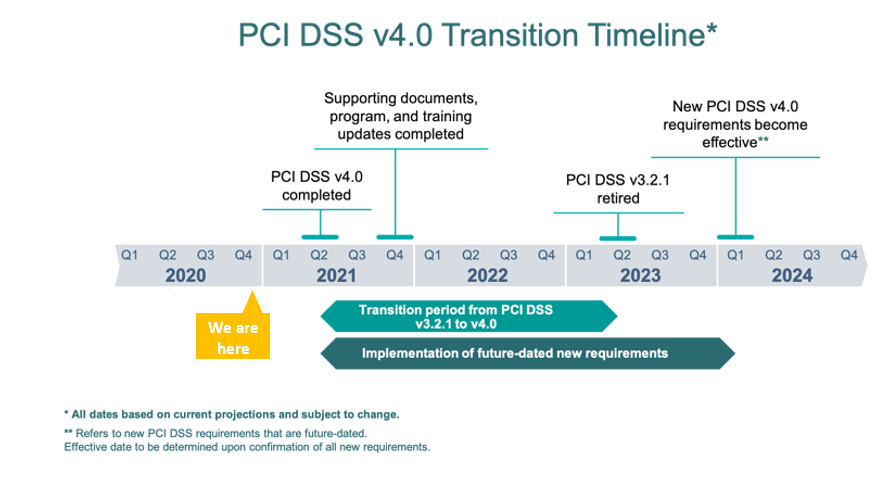 The Council strongly urges organizations with access to early drafts of PCI DSS v4.0 to wait until the final version is released before trying to implement any new or updated requirements.

We recommend that you bring in professional help to prepare your organization to comply with regulatory changes that v4.0 may require. ERMProtect offers effective and robust PCI DSS v4.0 preparation services, including but not limited to:

Our wide range of PCI compliance services will not only help you get ready for compliance, but improve the overall security posture of your organization.

November 28, 2022
Choosing a SOC 2 auditor can seem like a complicated process, but keep in mind that the most important factor is picking someone who will be a valuable partner …
VIEW ALL INSIGHTS
We use cookies to ensure that we give you the best experience on our website. If you continue to use this site we will assume that you are happy with it.Ok